Last weekend, the first truly great weather of the year here in Portland, we took a bike ride. Yes, a recreational jaunt, not something we often manage. We rode from our door to MAX light rail, took it to the end of the line west, continued through farmland and forest 22 miles to Stub Stewart State Park, stayed there in comfortable cabins, and back the next day. It was delightful. This is something many Portland families can enjoy, so here’s the story.

My boy and I started preparing only a couple hours before we left. We packed sleeping bags, some extra clothes, tools, food and water in the front basket of our Workcycles Oma. This bike is about 50 pounds of lugged straight-gauge steel, shod with fat tires, built for hauling in comfort instead of speed. We also considered riding a Brompton folding bike with its child seat and awesome touring pannier. These are the two bikes we go about our business around town with more than any other these days. Either way, we wanted to keep things simple, in part to make the point that you don’t need expedition-class, Stokemonkey-equipped cargo bikes like we took on last summer’s adventure just to go camping nearby with your kids.

I admit that our bike was operating near the limits of its capabilities with heavy, high loads both front and rear. It’s the least stiff of bikes we carry in this class, so irregular surfaces and higher speeds or higher pedaling power would occasionally get it shimmying in a way that required a lot of steering input to hold a line. I’d choose it again, though, because it’s comfortable and fun to watch people’s reactions as I pass on my granny bike with big-ass wicker basket, wooly neo-Mennonite getup, big smile, cheery klang of brass bell, and the boy waving off the back. I might as well be on fire. 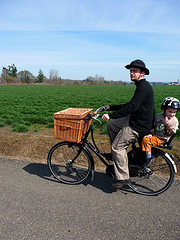 Dean and his two older boys took a tandem with Burley Piccolo attachment: 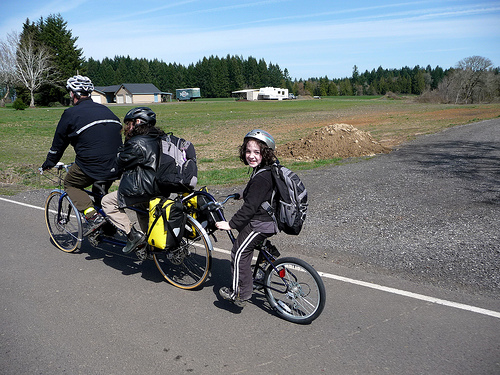 I’m a little bit skeptical of how meaningful is the real locomotive assistance provided by most young kids (and sometimes adults!) in arrangements like this. The strongest rider ends up doing far more than their fair share. That little man off the back? Thinks the pedals are foot rests. Dean is strong! My boy had actual footrests, but for all his excited jiggly fidgeting he might as well have been pedaling.

We rolled out early in the afternoon to catch MAX downtown. In retrospect, that wasn’t the best place to board, as the train was a bit crowded there in the fareless square and our jumbo bikes wouldn’t fit in the small spaces allocated for bikes on each car. We split up to board at separate doors. We managed with assiduous bike-shifting not to hinder anybody.

Riding out, I was reminded of the last time I rode this train this way, in 2000, on my way down the coast to then-home San Francisco. I reflected on all that’s changed and stayed the same these nine long years. Same: practical bikes as instruments of bodily, social, civic, economic, and spiritual reclamation, integration. Different: almost everything else.

Once out in Hillsboro, we relied on the cue sheet. Suburbs faded to farmland soon enough, with its quiet narrow roads and open vistas. And what a day!

In Banks we stopped to eat and get our bearings. The cue sheet would take us the remainder of the way to our destination via Highway 47, which we preferred to avoid. We asked at a gas station about the fabled Banks-Vernonia trail parallel to 47, and got directions to the trailhead just a hundred yards away. Attendant said it was rough for a ways but then got better. What it was was abandoned railway, “closed”, overgrown with brambles. But far in the distance it looked like it got better, so over the ties we pushed, maybe half a mile. We wondered whether the attendant was amusing himself at our expense, or had never come this way himself, or deemed any length of the highway unsafe for our passage. I worried about the tires on the thorns. When finally the way improved, there was a short path directly to the highway. Next time we’ll know better. At least the kids got to carry their weight a little ways. 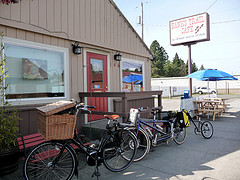 The trail proper is very nice. Free from the threat of motor traffic, I put in some earbuds and enjoyed the latest David Byrne & Brian Eno collaboration for the 1,234th time approximately, slapping the bars giddily in time as we shuttled along: 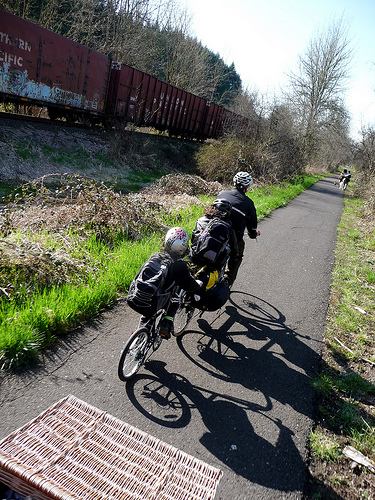 The last six miles or so were uphill, gentle railroad grade, as we entered forest. Mr. Byrne was crooning something about his neighbor’s car exploding up ahead when on my left Mr. Todd Boulanger appeared astride his Batavus. He had raced ahead of his family to greet us, so we stopped and chatted about our day. Just as we were about to get going again, my front tire began hissing. Fiddling with the valve stem, it seemed to me likely that the tube had failed at this very point, which filled me with dread because while I had brought patches and pump, I neglected foolishly to pack a spare tube. We’d be stuck if the valve had failed. I’d investigate in camp, ideally, before dark. I decided to sprint as long as I had any pressure remaining, not wanting to push too many miles.

On Dutch bikes like this, the bars are so close that you can’t stand up to get more power. But you can rest your elbows on the hand grips and grasp the bars near the stem to brace your upper body and put your back into turning the pedals. Think Amish triathlete. So we powered our way up as I kept an eye on the bulging sidewalls of the front tire, stopping several times to pump a few more pounds of pressure in, thankful that it would hold air for half a mile at a time at least. Todd B. passed me at one of these top-off stops, offering that he had packed a tube just in case. He also offered to check us in at the camp registration site in case they’d close at five. This set my mind at ease in equal measure as it drove home my stupidity in not being prepared. What if he gave me a tube and then he or a family member had an irreparable tube failure?

Near the park entrance, the last mile, the way becomes quite steep. I stopped to ask an older fellow on a mountain bike to confirm that the camp was up the hill. Without answering, he flagged down a truck driver of his apparent acquaintance and announced that we needed a lift up the hill. “No, no, we’ll be fine thanks — just wanted to know the way!” “But it’s a LONG way!” he said. “We came from Portland!” I offered half-truthfully. Incomprehension. “Thanks!” I grunted up the hill. Pushed maybe half a mile, half from steepness of grade, half from flatness of tire. A nice cool-down in lovely late afternoon light. We made it.

The cabins were quite luxurious: electricity, heat, ample insulation against sound and cold, vinyl-clad futons, wood tables and chairs. Not really like camping at all! Separate bathhouse with free hot showers.

Team Boulanger put us to shame for thematic consistency with sweetly atypical touring bikes (for this continent). Their astonishingly well-socialized older boys, witty and vegetarian, each rode scaled-down versions of my bike. I think Todd B. prepared at least a 5-course dinner on his gas stove with elaborate nesting titanium cookery. I might have seen an apron. There was whiskey late and mimosas in the morning. And French-press coffee. Todd B. even fetched firewood for us after showing us how to operate the cabin keyboxes. (I promptly locked myself out.) 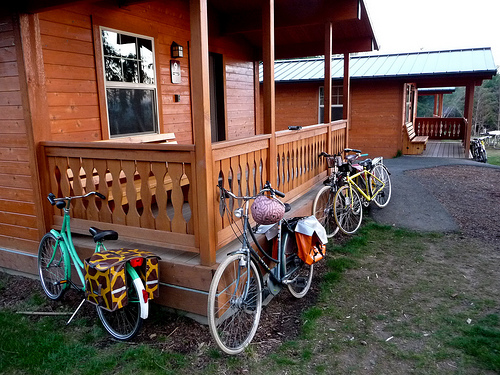 Meanwhile in Camp Schlub, our kids dropped TJ’s wieners into the firepit, incinerated marshmallows, and threatened to put each others eyes out with pointy smoldering sticks. There was much coughing and beating of fly embers. I whittled something that could be useful in case of attack by giant marauding boars, snarling through their cruel sallow tusks, but dangerous in all other cases. Dean brought a Hobo Pie press which, filled with gobs of TJ’s pizza dough, produced excellent panini-esque Hobo goodness. That’s right, Mr. B, grilled panini: think European hot-pocket, only lacking any kind of filling or even salt. Mr. B. sent over some late-harvest estate-bottled Tuscan EVOO to keep them from sticking and turning to charcoal, as well as one of their leftover sauces for dipping. 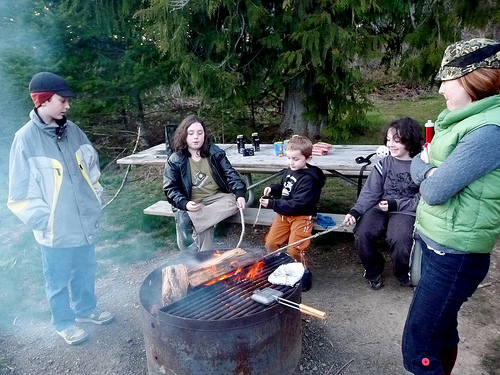 My flat turned out to be the normal kind, a thorn, easily reparable. I was able to relax after fixing that. In the morning, Dean found his rear tire flat, too. Patching that, we chided ourselves for pushing our luck by not packing more contingency supplies. We know better, but it seems running a bike shop has engendered in us an excessively casual approach to these things. Cobbler’s-children-go-barefoot syndrome? That and the iPhone, which can’t yet be used as a wrench, but did spare us from the horrible bother of a paper map. At least Dean packed a first-aid kit! 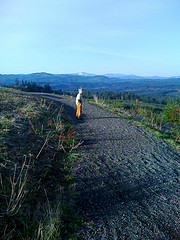 The morning light was beautiful. For the first time this year I left off the wool long underwear. The ride home was fast and easy down the long railroad grade. Too fast for Oma, it turns out. The trail is punctuated with many bridges. Many of the bridge transitions are sharp. I hit one at about 10 MPH, and the upward jolt caused my basket to fly open and my camera to tumble down a steep embankment. I had been looking for it for a few anxious minutes when along came none other than Mr. Todd Boulanger, who bounded down the slope and fetched it in no time. My camera now has a photo taken by Todd of the boy and me peering helplessly down at him, expertly composed I might add.

A few miles on, I swallowed my last shadow of pride and borrowed Todd’s hex keys to adjust the child seat that the jolt had shifted. Thanks man! I owe you.